BREXIT AND THE FUTURE OF EUROPEAN INSOLVENCY

Wessels Approach can be idealistic (let’s keep as much of the Insolvency Regulation in place) versus realistic. The latter is mine: so, in the absence of any specific agreement, the UK will have the status of a ‘third country’: that is, the same status with regard to the EU as, for instance, for Bolivia, Malawi or Thailand.

1 – Revival of existing treaties?
In the relations between Member States, the EIR Recast replaces, in respect of the matters referred to therein, the Conventions concluded between two or more Member States, see Article 85. The Netherlands, for instance, only has bi-lateral conventions with Belgium (1925) and Germany (1965). The UK has a convention with Belgium providing for the Reciprocal enforcement of civil and commercial judgements (1934) (see Article 85(i) EIR Recast). Will this 82 year-old convention be revisited?

2 – 27 ways to leave your lover
Without a bilateral or multilateral framework for recognition and enforcement, UK judgments may be subject to stricter review. Overall, this means that the recognition and enforcement of UK judgments in EU Member states would become more costly, time-consuming and burdensome for commercial parties. The EIR Recast does not cover third countries’ judgments. All Member States have their own rules. Only 4 out of 27 EU member states have implemented the UNCITRAL Model Law. These are Greece, Poland, Romania and Slovenia. Generally, these countries would recognise UK insolvency proceedings, as the UK is recognising proceedings from all EU Member States based on its Cross Border Insolvency Regulations 2006 (which incorporate the UK version of the UNCITRAL Model Law on Cross Border Insolvency.

In addition countries such as Belgium, Spain, Germany and – based on case law – have their own system of international insolvency law, which in their effects to a large part are comparable with the Model law. The approach via Member States individually, compared to the present situation, is clearly a mismatch. In all these other Member States, UK insolvency office holders seeking recognition would have to rely on obtaining recognition under the local laws of these Member States. This may be difficult, sometimes not possible, or conditioned, eg by reciprocity requirements. Alternatively, provided that local laws allow for this, a UK office-holder may file for the opening of territorial insolvency proceedings. Either way, it would be all rather cumbersome.

3 – revive the Istanbul Convention
The EIR also replaces the European Convention on Certain International Aspects of Bankruptcy, signed in Istanbul on 5 June 1990 (see Article 85(k) EIR Recast). 27 years later, this convention has been signed by Belgium, Cyprus, France, Greece, Italy, Luxembourg and Turkey, but only Cyprus has ratified it. It is not a uniform model, but rather provides menus. Article 40 of that Convention offers the opportunity to make a reservation with regard to its Chapter II (exercise of certain powers by the liquidator) and Chapter III (secondary bankruptcy proceedings). For this reason it allows for different rules to apply in different States. Such differences could result in a substantial hindrance to the application of the Convention.

4 – Transitional law
An EU oriented solution (which would include the competentece of the CJEU) could be a rule mirroring the transitional provision of Article 84(2) of the EIR Recast, i.e. that the EIR Recast shall continue to apply to insolvency proceedings which fall under its scope and which have been opened before the de facto Brexit reference date up to a certain date in future.

5 – Court-to-court paragraphs
The global trend in cross-border court-to-court communication and coordination, based on non-binding recommendations such as the ALI-III Global Principles and Guidelines 2012, the EU JudgeCo Guidelines of 2015 and the recent JIN Guidelines designed for common law jurisdictions.

Using the EU JudgeCo rules in the meaning of recital 48/Articles 41-44 EIR 2015 leaves in place MSs domestic rules augmented with binding rules on cross-border communication and coordination by courts. Here it fits to refer to section 426 of the English Insolvency Act. Subsection 4, states: ‘The courts having jurisdiction in relation to insolvency law in any part of the United Kingdom shall assist the courts having the corresponding jurisdiction in any other part of the United Kingdom or any relevant country or territory’. Presently there are around 20 such relevant countries, amongst which are Australia, Bermuda, Canada, Hong Kong, Ireland, Malaysia, New Zealand and South Africa (UK’s former or remaining colonial possessions).

The starting point for any request for assistance under Section 426 is ‘judicial comity’ (England v. Smith in Re Southern Equities Corp) [2000] B.C.C. 123 (C.A.); [2001] Ch 419, and – despite the word ‘shall’ – courts should grant a request for assistance unless there is some ‘extraordinary reason’. Extending section 426 Insolvency Act 1986 (‘related countries’) to all EU Member States would express the UK’s confirmation of ‘mutual trust’, in the understanding that the Member States apply reciprocity.

6 – New multi-party initiative? Polititians decide. Will Brexit be a cold and harsh divorce between the EU and the UK, or will parties understand not only each other’s needs, but the needs of businesses and investors for an efficient and effective cross border regime?

In general, in view of the asymmetric recognition landscape and the inefficient, time-consuming, uncertain, and complex post-de-facto-Brexit situation, one would hope that the EU and the UK will enter into an open and constructive phase of negotiation and will come to a result that will generally reflect the current EU framework. Although the current system is certainly not perfect, it does generally deliver clarity and predictability, and thus reduces costs and maximises value for creditors, which is much better then the dismal situation prior to 2002. Academics and practitioners should support such an initiative.

Below: Gabriel Moss and me, after the discussion. 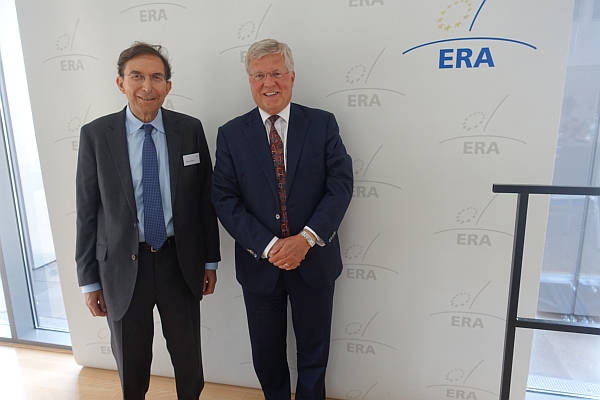