Some legal academics have a prominent influence in their field of expertise for some decades. For English insolvency law such an academic is Ian Fletcher, an emeritus professor of International Commercial Law, University College London. Even though having a time-honoured status, Fletcher is not retired, rather he is still active. Last month he delivered – via his publisher Sweet & Maxwell – the fifth edition of a work that was published in its first edition in 1989. Now with over 1000 pages, Fletcher introduces in 32 chapter ‘all’ one needs to know about English (and Welsh) insolvency law and the book serves as a solid introduction for newcomers and as a useful reference guide for professionals. The last edition dated from 2009.

Given the tremendous changes in the field of insolvency law, both in England and at international level, the author published two separate supplements (in 2011 and 2014) to keep track and inform his audience. Now these developments as well as those since settle in the fifth edition, the text of which presents the law as at January 2017, taking into account legislative changes that entered into force from 6 April 2017. The book therefore provides complete coverage of all aspects of insolvency law, both corporate and personal, national (England & Wales) as well as the international aspects of insolvency, all in one work. The engines producing insolvency law are national legislation, court cases, both domestic as well as international.

A few words on these domains. The book incorporates major changes to primary and secondary legislation, e.g. the Enterprise and Regulatory Reform Act 2013; Deregulation Act 2015; Small Business, Enterprise and Employment Act 2015 and the Insolvency Rules (England and Wales) 2016. This all has led to significant changes to English insolvency procedures. These include the replacement of debtors’ bankruptcy petitions to the court by online applications to an adjudicator, the abolition in virtually all cases of physical meetings of creditors, and also of company members, during the course of insolvency proceedings, a variety of alternative procedures for an office holder to obtain creditors’ and members’ consent, which includes the deemed consent procedure. English insolvency law keeps on track and leads with modern and efficient ways of dealing with matters.

Over 300 new cases have been included in the new edition, including judgments by the Supreme Court in Jetivia v. Bilta (extraterritorial application of section 213 and 238 of the Insolvency Act 1986), Olympic Airlines SA (jurisdiction under Art. 3(2) of the EU Insolvency Regulation), Belmont Park Investments (the anti-deprivation rule), Paycheck Services (meaning of ‘de facto director’), the Lehman Companies Pensions Cases (with the important decision that contribution notices issued by the Pensions Regulator are treated as ‘provable claims’ in administration, but do not constitute administration expenses) and BNY Corporate Trustee Services Ltd v. Eurosail (the statutory test of balance-sheet insolvency, and ‘inability to pay debts as they fall due’). Judgments by the Privy Council in cases relating to cross-border insolvency are discussed too, including Saad Investments and Stichting Shell Pensioenfonds v. Krys.

With my ‘continental’ eye I looked specifically at Chapters 28-32 in Part III (‘International Insolvency’), with some 200 pages. In Chapter 28 (‘Introduction: General Problems, and Issues of Principle’) one finds fresh literature, the different judicial opinions among the members of the House of Lords in McGrath v Ridell and a carefull treatment of cases such as Cambridge Gas, HIH and the infamous Rubin v. Eurofinance (enforcement of foreign judgments issued by a court during the course of insolvency proceedings, or: the much criticised limits to common law assistance for foreign insolvency proceedings). Fletcher demonstrates with references to several recent cases that some members of the highest courts (some decisions read like a theatre play, e.g. Lord Collins in the Rubin case: ‘… in my judgment Cambridge Gas was wrongly decided’, re-stated in the Singularis case) fails to uphold the historically distinguished tradition of responding to the evolving challenges encountered in international insolvency which Fletcher (‘with respect’) commends.

For instance, from Singularis it follows, subject to certain limitations, that ‘common law’ can be used to secure assets of a foreign debtor and to obtain information/discovery, but cannot be used to obtain discovery which, apart from personal jurisdiction issues, would not be available in the foreign insolvency proceeding. In Chapter 29 (‘Bankruptcies with an international element. The English Law and Practice’) the English legal system of a ‘good petitioning creditor’ (section 267) is considered in the light of the presence of foreign elements. Again Rubin and New Cap are treated as well as the old case of Gibbs & Sons v La Société Industrielle et Commercial des Métuax ((1890) 25 QBD 399). In this case the defendant, a French company, had agreed to buy copper to be delivered in England by the plaintiff. The defendant refused to accept the copper and so was liable in damages to the plaintiff. The defendant was placed in judicial liquidation in France and it was assumed that as a matter of French law, the defendant was discharged from its liability in damages. However, the court held that French law was irrelevant because it was ‘… not a law of the country to which the contract belongs, or one by which the contracting parties can be taken to have agreed to be bound; it is the law of another country by which they have not agreed to be bound.’ Fletcher grumbles as English private international law in this respect ‘… is insular and xenophobic in the extreme, and plainly guilty of maintaining dual standards with regard to the principle of universality of bankruptcy’. The case is mentioned here, as it may come to life post-Brexit. Fletcher mentions a September 2016 case of the Singapore High Court that indeed did not apply the Gibbs rule.

The latter regulation is described in some 12 pages and the author must have struggled here to present a fair picture of the new rules. In a post-Brexit area, after the 2 year Article 50 Notice period, certain parts of the English rules may become active in relation to (the remaining) 27 Member States. Section 426 provides – for cases beyond the Insolvency Regulation – recognition and enforcement of foreign insolvency proceedings on a quasi-mandatory basis for any part of the UK ‘… or any relevant country or territory’, presently mostly Commonwealth countries, including e.g. Australia, Canada and New Zealand. It requires a request from the relevant foreign court and may have the effect that either relevant English insolvency law or foreign insolvency law is applied.

Section 426 cannot be used to recognise and enforce a foreign in personam judgement (unless usual non-insolvency law criteria for recognition met, e.g. avoidance of preference as per Rubin/ New Cap), but it can be used to obtain English non-insolvency law remedies such as injunctions (Hughes v Hannover Re). Interesting reading, especially when the UK would consider to add to the list of relevant countries the 27 EU Member States. The Cross – Border Insolvency Regulations 2006 are very closely based on the original Model Law, except that there are specially privileged provisions for secured creditors and that court are not obliged to cross-border cooperate, rather they ‘may’. Recognition and enforcement of foreign insolvency proceedings is available for all countries, withour a reciprocity requirement. This chapter also contains updates of the activities surrounding the UNCITRAL Model Law, describes some UK and USA cases and highlights the ALI-III Global Principles of 2012, well known to readers of this blog.

In all the fifth edition provides an invaluable update about the English law of insolvency, whether corporate, personal, or cross-border in nature, presented in a careful and clearly written commentary. It is recommendable for university and academic institution libraries, courts, international students and scholars as well as practitioners, in or outside England.

Below a picture of Ian Fletcher (right hand) and me, taken last week May 2017 in South West England, after a short walk, a good lunch and a pleasant talk. 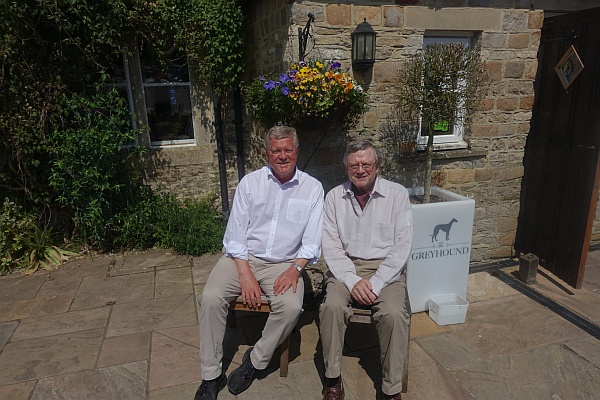