In the first week of September 2017, during the General Assembly and Annual Conference of the European Law Institute (ELI) the report ‘Rescue of Business in Insolvency Law’, written by prof. em. Bob Wessels (Leiden, Netherlands) and prof. Stephan Madaus (Halle-Wittenberg, Germany) was approved as an official ELI Instrument. The Report consists of 115 recommendations explained on more than 375 pages. The Report contains recommendations on a variety of themes affected by the rescue of financially distressed businesses.

On its background: since the global financial crisis, insolvency and restructuring law have been at the forefront of law reform initiatives in Europe and elsewhere. The specific topic of business rescue appears to rank top on the insolvency law related agenda of both the European Union (EU) and national legislators faced by a growth of insolvency related business problems, which clearly highlighted the importance of efficient mechanisms for dealing with distressed, but viable businesses. For the European Law Institute, this fuelled the momentum to launch an in-depth project on furthering the rescue of such businesses across Europe. The European Law Institute, established in 2011, is an independent non-profit organisation established to initiate, conduct and facilitate research, make recommendations and provide practical guidance in the field of European legal development. Building on the wealth of diverse legal traditions, ELI’s mission is the quest for better law-making in Europe and the enhancement of European legal integration. By its endeavours, ELI seeks to contribute to the formation of a more vigorous European legal community, integrating the achievements of the various legal cultures, endorsing the value of comparative knowledge, and taking a genuinely pan-European perspective. As such, its work covers all branches of the law: substantive and procedural; private and public (see www.europeanlawinstitute.eu).

In September 2013, the ELI Council approved the proposal for a project on the ‘Rescue of Business in Insolvency Law’ (‘Business Rescue Project’) and appointed professors Bob Wessels and Prof. Stephan Madaus as Project Reporters to lead this two-stage project. The first stage comprised the drafting of National Inventory and Normative reports by National Correspondents (NCs) from 13 EU countries. In addition, Gert-Jan Boon, University of Leiden, prepared an inventory report on international recommendations from standard-setting organisations, such as UNCITRAL, the World Bank, the American Bankruptcy Institute or the Nordic-Baltic Business Rescue Recommendations, under the supervision of the Reporters. Based primarily on these detailed reports, the second stage consisted of drafting the ELI Instrument on Business Rescue (‘ELI Business Rescue Report’) that elaborates recommendations for a legal framework enabling the further development of coherent and functional rules for business rescue in Europe. After the Project Team finalised the draft Instrument early 2017, ELI Fellows and Members of the ELI Council voted to approve the ‘ELI Business Rescue Report’ at the ELI General Assembly, representing ELI Members, and Annual Conference in Vienna (Austria) on 6 September 2017 with no objection. This occured after a 90 minutes lively debate.

We as Reporters feel that the Report is timely and may have a significant and positive impact on the harmonisation efforts of the European Commission as laid down in the November 2016 Proposal for a Directive on preventive restructuring frameworks. The topics addressed in the Report are intended to present a tool for better regulation in the EU, developed in the spirit of providing a coherent, dynamic, flexible and responsive European legislative framework for business rescue. Mindful of the European Commission’s commitment to better legal drafting, the Report’s proposals are formulated as comprehensibly, clearly, and as consistently as possible. Still, the recommendations are not designed to be overly prescriptive of specific outcomes, given the need for commercial flexibility and in recognition of the fact that parties will bargain in the ‘shadow of insolvency law’. The Report is addressed to the European Union, Member States of the EU, insolvency practitioners and judges, as well as scholars. The targeted group many times flows explicitly from the text of a recommendation or the context in which such a recommendation is developed and presented. The Reporters cherish the belief that the report will assist in taking a next, decisive step in the evolutionary process of the European side of business rescue and insolvency law.

To contact the reporters use for Stephan Madaus the address: stephan.madaus@jura.uni-halle.de, and for me: info@bobwessels.nl. 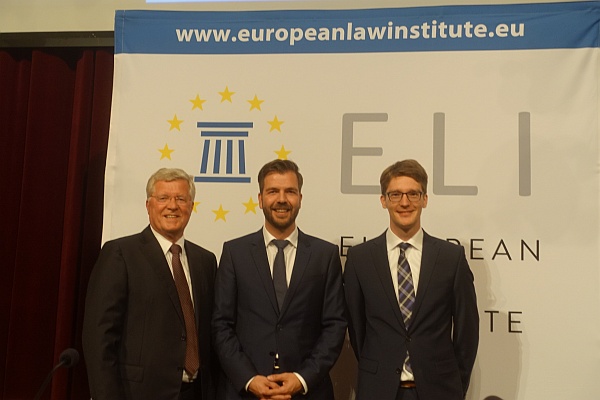